Both migrants and staff made their own fun. A large recreation hall was built in 1950, where people listened to music or read books, or played billiards, table tennis or badminton. Soccer was a popular sport.

Mr Chidlow, who operated the local bus services, made a number of trips each day between Northam Camp and the town of Northam at sixpence a seat.

The recreation hall was also used for concerts, dances, film nights and Christmas parties. Dances were held every Tuesday and Friday night. Often bands made up of immigrants provided the entertainment and they were sometimes joined by local musicians.

The weekly dances were often attended by dignitaries and residents from Northam. Local girls soon found their way to the dances, attracted by the large number of single men.

There were also musical recitals, choir and solo singing, and dance routines. Movies were shown outdoors in summer and in the recreation hall in winter. Weddings were also a regular event for celebration. 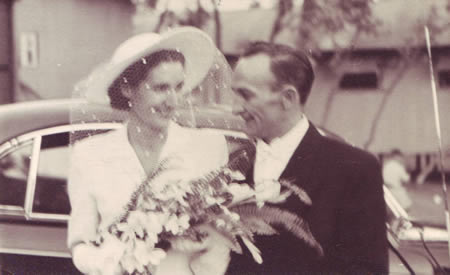 The children enjoyed swimming at Bulong Pool and pinching oranges from the neighbouring orchards. They also liked the thrill of hunting rabbits.

Christmas was a weeklong celebration at Northam Camp. For most children, it was their first encounter with Santa Claus and Australian ice cream and lollies. Church services were held, dances continued throughout the week and it all culminated in a masked ball on New Year’s Eve attended by Northam locals.

There was a lot of interaction between immigrants and the local community. Organisations such as the Red Cross, Northam Aeolian Club, Rotary Club and Junior Farmers hosted social events, took immigrants on outings and give gifts of toys and so on.

Dosan Basanovic explains how migrants at the camp were free to come and go and mingle with the locals. There was a cinema at the camp and dances were held regularly, there was even an orchestra!

Dosan Basanovic describes his wedding to Elli, the first to take place at Northam Camp and what was involved.