After the 1935/36 tent camp, plans for buildings to accommodate a complete infantry brigade were prepared by the Quartermaster General’s Office and the Works Branch of the Australian Army. However, building activity was slow. 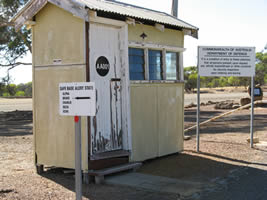 By early October, 175 huts had been built. Some of the larger buildings, like the mess huts, were relocated from the World War I training camp at Blackboy Hill. Other buildings were constructed from materials recycled from Blackboy Hill.

Most of the buildings were timber framed clad with corrugated iron. The barrack buildings, each accommodating 48 men, were grouped together to form a company. Each company was serviced by a headquarters, a quartermaster’s store, cook house, mess hut and ablution block.

Officers and senior NCOs had separate accommodation and mess.

Located in the centre of the camp, the Hospital initially comprised a main building with two wards of 16 beds each, a treatment room, offices for the commanding officer and matron and kitchen facilities. Two detached buildings accommodated the quartermaster’s store and nurses’ quarters.

However, the supply of VADs eventually dwindled and a new service was established – the Australian Army Medical Women’s Service (AAMWS). VAD members were absorbed into the new service and new recruits completed standard army training and specialist trade courses.

Members of the Australian Army Medical Corps training in the camp spent time in the hospital to get hands on experience.

In 1943 a hut was built behind the hospital so staff had their own mess and recreation hall.

The 38th Australian Camp Hospital was disbanded in January 1944. The buildings were handed over to the Armoured Division and staff were transferred to other medical units. Most staff from Northam then served at the 110th Australian General Hospital at Hollywood in Perth.

– This brief history is based on notes provided by Mrs Glynneath Cody (nee Powell, WFX37442 AAMWS)

Phil Loffman explains how he joined the cadets at 14 (saying he was 16) and helped expand the camp with the aid of horses.

Ray Middleton describes the conditions within the Army Camp's accommodation in the 1940s and how it prepared them for WWII.