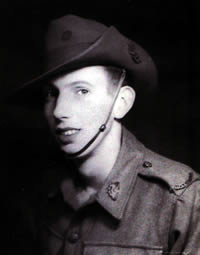 Ted Wallin was born in Fremantle on 28 July 1920. He completed his apprenticeship as a letterpress machinist on 31 October 1941 and enlisted in the 2nd AIF on 10 December 1941.

Ted served in Singapore with the 2/4th Machine Gun Battalion where he was taken prisoner of war by the Japanese. Edward spent time in several POW camps in Singapore and Thailand, where he worked on the railroad.

He was returned to Australia on a Dutch hospital ship via Singapore, Darwin and Melbourne. He returned to Perth from Melbourne by troop train and was discharged from the AIF on 10 January 1946.

Ted returned to his trade as a printer and in 1950 married Dorothy, with whom he had three daughters. Ted Wallin died on 2 May 2000, shortly before his 80th birthday and his and Dorothy’s 50th wedding anniversary.