A hospital was established at Northam Accommodation Centre in 1949. It was administered by the Health Department and run by a doctor, matron and large number of nursing staff. Although many migrants were doctors in nurses in their home countries, their qualifications were not recognised in Australia and they were employed as orderlies and aides at the Camp Hospital.

Maternity wings were established at Northam Camp and V Block was set aside to as an isolation centre to deal with an outbreak of measles. There was also a tuberculosis ward.

Australian medical practices caused much consternation for some families. For example, families of seriously ill children were not allowed to visit them. Language barriers made communication difficult and interpreters were employed to explain to the parents what was going on.

It was particularly difficult for women giving birth. With no extended family to help, language difficulties and usually little medical attention during the pregnancy, it could be a lonely and confusing time for young mothers.

The authorities failed to give women classes on Australian ways and many mothers overdressed their children during their first summer, causing heat stroke.

Oh, it was terrible. I was so unhappy of the uncertainty that lay ahead. We didn’t know where our husbands were and we couldn’t speak enough of the language to talk to somebody to ask questions ... We were just hanging onto each other.

– Reproduced from Nonja Peters, Milk and Honey but No Gold, page 157] 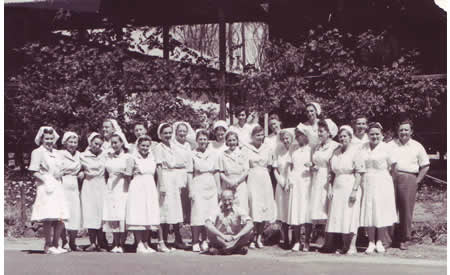